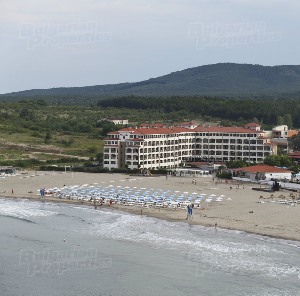 Hotel Regina Mare
2* stars
LOCATION: on the beach at Nestinarka region, Tsarevo HOTEL CAPACITY: studios, one- and two-bedroom apartments of surface areas between 40 and 120 square meters, organized in three sections (A, B and C) most of them with sea view. HOTEL FACILITIES:

Tsarevo - formerly known as Michurin in Bulgarian and Vasiliko in Greek, is a town and seaside resort in southeastern part of Bulgaria. The administrative center and municipality of Tsarevo is in Burgas Province. It is situated on a peninsula 70 km southeast of Burgas on the southern Bulgarian Black Sea Coast and at the eastern foot of Strandzha mountain. South from the city there is a peak called “Papia” with altitude 502 m and a wonderful view – the mountains and the sea which make Tsarevo a good place for living and vacation. In 1892 a fire destroyed almost the entire city and since that time is divided in Old and New city. The old town was located on the southern part of the peninsula and the new on the northern part where are built new houses and churches.