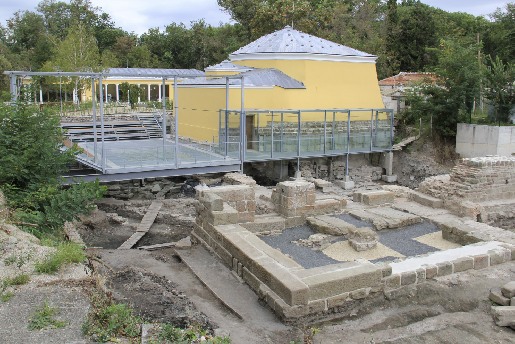 Burgas Mineral Baths (Vetren) is one of the most ancient spa resorts in Bulgaria. It is located 15 km northwest of the city of Burgas, 31 m above the sea level.

The climate in Burgas Mineral Baths resort is seafront with continental influence. Summers are hot and winters are mild. The average air temperature is approximately 12.4 degrees Celsius (36.32 Fahrenheit). Cloudiness and relative humidity are moderate, rainfall is weak and there is a high level of sunshine throughout the year (more than 2000 hours annually). These characteristics of the climate favour spa and climatic treatment as well as year-round prophylaxis.

The healing properties of the mineral springs in the region of Burgas Mineral Baths have been known since the earliest times. In the past there was a Thracian settlement in that area - a sanctuary of the Three nymphs, protectors of the healing springs. Later, at the beginning of the II century, a new city, called Aquae Calidae – Thermopolis, was founded by the Roman Emperor Trajan. At that time were built the emperor’s baths that existed and had been used for centuries by Romans, Byzantines, Bulgarians and Ottomans.

The mineral water from the springs near Burgas Mineral Baths is characterized as hot (41 degrees Celsius/105.8 Fahrenheit), weakly mineralized, chloride-hydrocarbonate sodium, silicon, fluoric, with strong alkaline reaction and total flow of 36 liters/second. The water is clear, colorless and odorless, soft, with excellent drinking and tasting qualities.

Burgas Mineral Baths resort is recommended not only for prophylaxis and treatment of the above listed disorders, but also for healthy people - for fitness improvement, overall strengthening the body, cold and infectious diseases prevention and for enhancing physical and mental endurance.